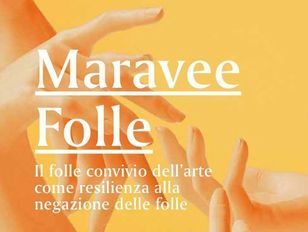 At the Casa della Musica in Grado, the Convivio alla Finestra exhibition can be visited until September 26th, every day except Mondays from 19.30 to 22.30.

As part of the Maravee Folle Festival, conceived and directed by Sabrina Zannier, organized by the Maravee Cultural Association, Convivio alla Finestra staged a Convivio participated at a distance, with a spatial and temporal filter, but so shared as to generate deep contact between culture and society .

At the Casa della Musica, near the Municipality of Grado, you can admire two personal exhibitions and a video area of ​​the related backstage. On the ground floor, in Convivio in biodiversity by the Anotherview collective composed of the Italian Marco Tabasso, the Russian Tatiana Uzlova and the Dutch Robert Andriessen, two digital nomadic windows stage the idea of ​​conviviality in the territorial, but also human, biodiversity of Friuli Venezia Giulia. Open to the naturalistic and socializing wonders, they return the memory of crowds gathered on Mount Lussari for the longest torchlight procession in the Alps, resumed for 24 hours between 31 December 2019 and 1 January 2020. Another twenty-four hours are dedicated to the festival of “Perdòn de Barbana ”, the main religious tradition of Grado, resumed in July of this year, which since 1237 renews the vow to the Madonna who would have saved the town from the plague.

On the first floor Convivium of desire by the Valle d’Aosta artist Giuliana Cuneaz, with an immersive video-installation opens a “window” of magical hope, aimed at the crowds of an urgent cultural and social conviviality. Against the backdrop of a nocturnal sea as a metaphor for an uncertain era, the evocative character of Amabie – legendary Japanese figure, benevolent spirit aimed at healing epidemics and wishing for fruitful years – appears as a strange creature bearer of good in the face of uncertainties .

The best destination for summer holidays is Italian

You can find out more about which cookies we are using or switch them off in settings.

This website uses cookies so that we can provide you with the best user experience possible. Cookie information is stored in your browser and performs functions such as recognising you when you return to our website and helping our team to understand which sections of the website you find most interesting and useful.

Strictly Necessary Cookie should be enabled at all times so that we can save your preferences for cookie settings.

If you disable this cookie, we will not be able to save your preferences. This means that every time you visit this website you will need to enable or disable cookies again.